What happened to the markets in February?

February is traditionally the bridesmaid to March as far as real estate activity is concerned. But not this year!

Rarely before has the real estate market cranked into overdrive after the Christmas slumber. State records within the Ray White Group were broken all over the place leading to total sales value of $3.1billion. Whilst this figure is not an all time record it was certainly the best February we’ve seen.

Sydney was the pace-setter. One can potentially define a market by the percentage of properties taken to the market by the auction process. And this percentage has certainly increased for us. Rarely has there been such vendor confidence in the likelihood of competitive bidding. Again and again sale prices are going well over the reserve figure.

Many new office openings in February, including Ray White Leichhardt

How long will this last? Well, property markets love low interest rates and, as far as we can tell, they are set to be enshrined for the foreseeable future.

March 2015 is the third anniversary of New Zealand’sproperty market turnaround. If that time frame relates to Australia, which historically it does, then there’s still just under a year before the same anniversary for the Australian market. 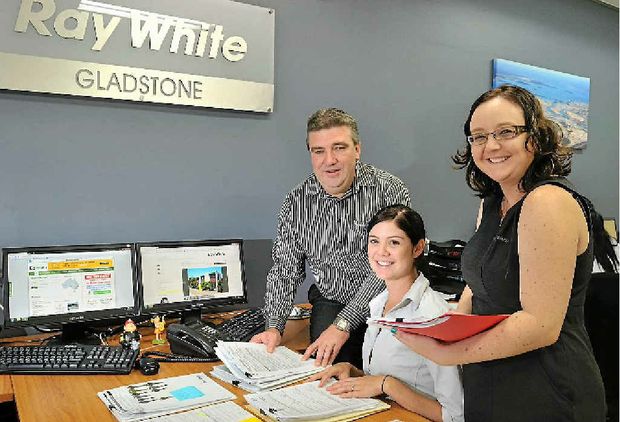 The impact of a cyclone on property management businesses, even properties that are vacant, is significant for our industry and our clients. This sort of natural event requires professional skills and experience. It’s where our industry’s leaders step up and take additional responsibility for looking after the investments of their clients. Of particular importance are those absentee vendors’ properties.  John Fieldus from Ray White Gladstone showed particular leadership offering cyclone-affected Rockhampton on-site support to boost their professionals on the ground.

We have documented here some of the incredible recent development site sales of which we have been a part, fuelled predominantly by offshore investors. We are also witnessing similar results for commercial investment sales.  Bob Walsh achieved an off-market sale of the Woolworth-anchored Peninsula Shopping Centre at Matraville to a private property trust for $21.9million.  John Dwyer’s sale of a building in Brisbane’s Ascot, leased toCommonwealth Bank on a four year lease, at a seven per cent yield, provided further evidence of yield tightening in line with reducing interest rates.

Loan Market recorded an equal-record number of lodgements: $950 million in February. NSW in particular was a strong market for the group exceeding its previous highest result by almost 20 per cent.

The announcement of the expansion of our Beijing business through a new partnership agreement with ECOTECH, a wholly owned subsidiary of the Chinese government’s CCPIT was important news for all our members and clients. CCPIT is responsible for the promotion of Chinese trade and investment abroad, and has 200,000 corporate members throughout China.  This unique partnership will facilitate the introduction of Australian and New Zealand real estate investment opportunities throughout China, adding tremendous additional capacity and reach to our Beijing team.

Still in that region, our Hong Kong office led by James Li partnered successfully with Andrew Salvo from our Southbank office in Melbourne on the marketing of the “Australia 108” apartment development.  James and his team have sold 23 units in the project, which will be the tallest residence in southern hemisphere.

The hotels sector continues to be strong and it is timely that an iconic property such as the Newport Arms Hotel becomes available to the market. It’s an incredible opportunity being marketed by Andrew Jolliffe.

February was also the month where the leaders across Ray White’s corporate teams came together to plan 2015. The key event we’re all working towards being our major conference scheduled for August: Connect 2015.

Connect Conference in August is our cornerstone event this year

Our network has responded well to new technology launched – Homepass– with 192 applications across Ray White. The Homepass team is working hard to have all agencies activated over the course of March in Australia, and getting ready to launch in NZ in April. It is fantastic to see our progressive Ray White offices embracing the opportunity to be leaders in mobile marketing, and use the opportunity to differentiate their vendor campaigns and win more listings.

We have renewed strength in the key inner suburbs of Sydney with the opening of Ray White Leichhardt (David Eastway and James Price) and Ray White Green Square/Botany (Billy Cauldwell). More to come. In the ACT we’ve seen the opening of Weston Creek and in Queensland, we have new offices in Everton Park and Mango Hill.